When I posed the question “Do You Want to Consolidate Multiple Websites?”, I didn’t expect such clear lines to be drawn between people who strongly believe in maintaining separate niche sites and those who themselves are dealing with whether or not to combine WordPress blogs into one main site. While everyone wasn’t in total agreement, most everyone agreed that there can be situations where consolidation is the best route to go.

Was my post controversial? Yes. Not everyone agreed with our strategy. Some readers felt that clearly defined niche sites are the route to go. Other readers were considering the same strategy. The thing is that there isn’t a one-size-fits-all strategy for deciding if you need one website or multiple sites. This week, let’s take a closer look at the thought process behind the decision to merging multiple blogs into a new cohesive brand.

Insight: What did my readers have to say?

I love a good discussion and I thank my blogging community for taking the time to weigh in on my posts. My mantra has always been that “We can all learn from each other.” So, let’s take a look at some excerpts from the comments and see what my readers had to say: 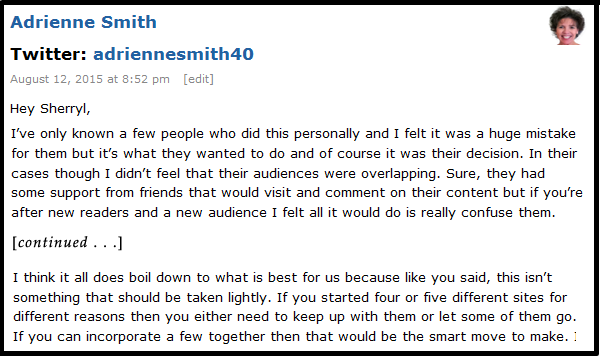 Note: The above quotes are excerpts that were taken from the comments and may not be the comment in its entirety. If you’re interested in reading the entire conversations, you can find the conversations here.

Overall, the concerns that were raised included:

Background: Why merge three sites into one?

When I met Doreen Pendgracs in 2011, she already had three websites. One was a static HTML author site and the other two were WordPress blogs. Shortly after meeting her, she built a 3rd WordPress site to promote her upcoming book Chocolatour.

When Doreen built those sites, she was targeting specific audiences. Originally, her static website had served as a place for editors (and people wanting to hire her as a freelance writer) to see her work. However, since she couldn’t blog on that site, she launched a WordPress blog about writing and lifestyle experiences. Shortly after, she launched a travel blog. Finally, she launched a third blog to promote her upcoming book “Chocolatour: A Quest for the World’s Best Chocolate – Volume One“.

As the years went by, Doreen honed her focus on traveling and chocolate. Her audiences were blending. Yet, she found herself with four disjointed sites and the desire to build the Chocolatour brand. To quote Doreen:

While Doreen’s separate websites were originally meant to target different niche audiences, there was a common thread between them. Over the years, the topics she covered blended and overlapped. Like many bloggers, she had created blog categories as she wrote.

When we examined her three blogs, we discovered that her blog posts could be broadly categorized as follows:

Note: Please keep in mind that the above calculations are approximate but they are indicative of the content overlap which was one of the deciding factors in her decision to merge her blogs.

To give you a better look of what her blog content looked like, take a look at the pie charts below. Please keep in mind that these are prior to merging.

Now, when we look at the category breakdown of her posts on her new site, this is what we see:

An Opportunity to Change:

When all was said and done, Doreen ended up re-categorizing several of her posts and her new (merged) blog has a better flow to her content. Readers who are interested in a topic such as travel, can find all her posts in one category. (Previously, she had travel blog posts on all three of her sites.)

When Doreen had her three sites, she used the category “Chocolatour” to classify posts about her book, promotional events, etc.. When she cleaning up the categories on her old sites (before consolidating them), she made the decision to eliminate that category. After all, her strategy is now that “Chocolatour” is a brand.

While cleaning up her blog categories, Doreen looked for other opportunities to create a better experience for her readers. Since the majority of Doreen’s posts (with the exception of events) stand the test of time, Doreen decided to remove the original publish dates and she is now actively promoting her older content. Since many of her readers had not seen some of her content before, she’s building excitement and she’s recovering the subscribers that she had lost. (She had lost 10% but has since gained more.)

The Results: A Look at Google Analytics

I know many of you are interested in what effect the site consolidation had on Doreen’s website traffic. Now that we have four months of data from Google Analytics, I tackled the task. Since there were so many variables in play, I thought the easiest thing to do would be to present the data from the 3 separate sites as compared to the data from her new merged site. (I’ll do my best to explain what you’re looking at below.) 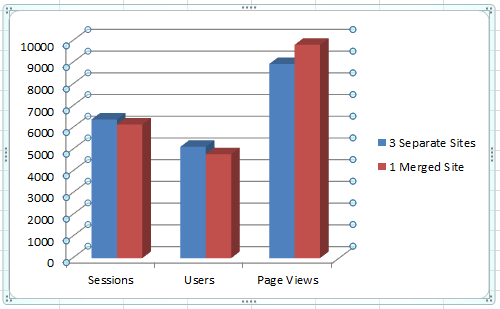 In the chart above, the blue columns represent the totals from the three separate sites and the red columns are the new website.

As you can imagine, comparing this data is challenging. The official launch of the consolidated site was July 16, 2015. Prior to that Doreen spent a good part of June and the beginning of July preparing her three sites to be merged (including recategorizing her posts). Therefore, I chose to compare the four month period ending June 15th to the four month period ending November 15th.

Here’s an overview of the approach that I took:

Since we know that many of Doreen’s readers were visiting two or more of her sites, we would expect to see the number of sessions and users to decrease some. The almost 10% increase in page views is encouraging. To me, it appears that people are reading content that they weren’t before. For example, visitors to her travel blog may now be reading her writing blog (and vice versa).

Further Analysis showed that the “Avg. Session Duration”, “Pages/Session”, “Bounce Rate” and “% New Sessions” remained relatively consistent. Overall, both Doreeen and I are optimistic that she is well on the way to establishing her new brand. The feedback that she has received so far has been positive.

What are your thoughts? If you had been thinking about consolidating multiple sites are you encouraged or discouraged by our results so far? Do you still have questions? As always, please feel free to weigh in.

53 thoughts on “Case Study: Consolidating Multiple Websites Into One”