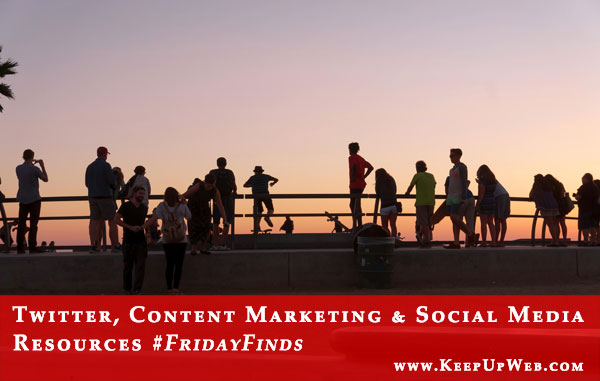 I can’t think of a better way to kick off my 2015 #FridayFinds series than to take a close look at an in-depth study of the drivers behind Twitter, the most shared content marketing articles of 2014 and some highly recommended social media marketing tips and tools. I’m sure you’ll find many of these resources valuable in the year ahead.

In his article Twitter Engagement Unmasked: A Study of More than 4M Tweets, Eric Enge (from StoneTemple.com), shares with us the analysis of more than 2 million (Western language) tweets. As Eric stated, one of the main goals of this study was to see what the drivers are behind retweets, favorites and replies.

Some of the factors that were included in the study were:

As you watch the video, you’ll get a general overview of how the study was conducted and the data that was analyzed. One of my takeaways (at 1:51 in the video), is when Eric Enge, (from Stone Temple Consulting), was asked the question we all want to know the answer to:

A few other key takeaways you will learn are:

I strongly recommend checking out Eric’s post for a true appreciation of this study. That way, you can identify those triggers that you can use to tweak your twitter strategy.

Meanwhile, I want to share the infographic that they included (for an overall snapshot of the data that was compiled).

One of my favorite end-of-the-year list posts for 2014 is a compilation of The Top 100 Content Marketing Articles of 2014 by Kristi Hines (on KristiHines.com). This article is one that you’ll want to bookmark as a resource for 2015. In addition to Kristi’s list, there are several additional suggestions in the comments.

Since I rely on great content for my #FridayFinds series, I was thrilled to recognize several of the authors who were included:
Kevan Lee, Courtney Seiter, Neil Patel, Jayson DeMers, Michael Stelzner, Garrett Moon, Aaron Lee, Jeff Bullas and Kristi.

Most of you are probably familiar with Michael Stelzner from SocialMediaExaminer.com. His list of 36 Tools and Tips for Social Media Marketers is sure to contain resources that are new to you. In his post you will find:

After reading this post, I signed up for a couple of tools and I plan on giving them a try. As an alternative to Google Alerts, I set up Talkwalker Alerts. For now, I plan on receiving my alerts via email, but text and an RSS feed are both options.

The next thing that I did was sign up for a free account on Swayy. I’m not as confident about using this tool. It looks like there may be a bit of a learning curve with this one. (Please let me know if you have any tips or resources on this one. To be honest, I skipped watching the video that they suggested.)

I had to authorize Swayy access to my Facebook, LinkedIn and Twitter accounts. One thing I did notice is that the default was to mention @getswayy on outgoing tweets. (That is not okay with me.)

While I was already familiar with a lot of the tools that are listed here (and already use several of them), I can happily say that I’ve never needed to use the Facebook Debugger tool. Chances are when/if I do need it, I wouldn’t be able to remember what it’s called. Thankfully, it’s one of the many helpful tools in this list to refer to.

Are you surprised by any of the findings in Eric Enge’s analysis? Would you add any other content providers to Kristi’s list? Which of the social media tools that Michael Stelzner mentioned do you like? Do you have any other favorites that you’d like to add? We’d love to hear from you!